Spends years of occupation in his hometown with his mother and grandparents. In front of Volodymyr’s eyes, Khreshchatyk street was blown up, and children from the neighbouring houses were driven to Babi Yar.


Studies at the Kyiv State Art Institute, which he graduated in the studio of Professor Karpo Trokhymenko.


Together with Ada Rybachuk takes his first trip to the North, staying in May and June on the White Sea, and in July and September — on the Kolguyev Island.


Got the topic of diploma work approved (“Winter shore of the White Sea. Kolguyev Island”), together with Ada Rybachuk goes on the second expedition to the North, which lasted one and a half years.


On April 10, with one year delay, public defense of the diplomas of Rybachuk and Melnychenko take place, which also turns out to be the first solo exhibition of artists held in the auditorium of the Art Institute. Volodymyr Melnychenko presents two large-scale paintings “The First of September” and ”The North Sea” along with many sketches made in the North.

Creates the paining “Hell”, which is displayed at the exhibition organized within the 6th World Festival of Youth and Students’ held in Moscow.


Melnychenko and Rybachuk went on the third and longest journey to the North.


Together with Ada Rybachuk gifts 118 pieces of art to the city of Naryan-Mar, these works formed the basis of the first Arctic Museum of Art. Today, the museum’s collection includes 237 works by both authors.

The works created by the artists started appearing in the republican and central periodicals. General approving feedback got opposition in the face of Kassian’s odious article, “The Art Is Not Suffering”, published in Pravda of Ukraine newspaper. In the article the author accused Rybachuk and Melnychenko of “departing from the principled positions of affirmation of the method of socialist realism”1 .


Together with Ada Rybachuk creates the monumental and decorative design in the Kyiv bus station, for which receives the First All-Union Award of Young Architects for Interiors.


Together with Ada Rybachuk leads art lessons at the children’s boarding school on the Kolguyev Island and creates “Big picture of our island” with students.


Together with Ada Rybachuk works on the concept for monumental and decorative design of the Republican Pioneer Palace, where the mosaics “Children of the World”, “Banners”, “The City”, as well as the mosaic triptych “Wonderful Violin” are created. The bottom of the fountain, located in front of the main facade of the building was decorated with their decorative composition “Sun, stars and constellations”.


The results of work created during the artistic education of children on the Kolguyev Island are displayed in the Literary house in Moscow.


Together with Ada Rybachuk participates in the competition for the project of the monument to the victims of fascism in Babi Yar.


Work begins on the project of the architectural and plastic solution of the Memorial and Rite Complex “Memory Park”, construction of which begins at the Baikove Cemetery in Kyiv. It will take about 13 years for Rybachuk and Melnychenko to finish this grandiose design.

Together with Ada Rybachuk works on a project of the historical and archeological park “Ancient Kyiv”.


In conjunction with the design of Memory Park, together with Ada Rybachuk travels to the villages of Volyn, Podillia, Bukovyna, studying folk customs and rituals. The artists convey their impressions of what they saw in the series of prints “Indian Summer”, “Baba’s Death”, “Easter at St. Demetrius”.


Major efforts are directed towards the creation of the Memory Wall, designed in collaboration with Ada Rybachuk. The artists have developed a new technology for the execution of monumental reliefs, which consisted in the production of a special trench frame, which was later filled with liquid concrete. The total area of reliefs reached 2000 m2, in particular, the height varied from 4 to 14 m, and the length was 213 m. Later, the artists will write: “Equally passionately we formed both architecture and plastic form of land — space and the sculpture itself. Its form had to be covered with a mural, striving with all knowledge and ability to synthesize, adjust to what was happening in Memory Park. To a worthy sounding event, the mural had to play the most significant action on human life. To return the human death act to its humanistic meaning”2.


Rybachuk and Melnychenko’s work with children, conducted during the 1960s, resulted in the album “We About Your Island. Drawings of the Children of the Kolguyev Island” published in Moscow by the Soviet Artist.


In cooperation with Ada Rybachuk designs the Oratory of the Revolution in Moscow, the historical and archeological complex “Kontraktova Square” in Kyiv, and the stone symbol “Kyiv — Hero City” in Florence.


Together with Ada Rybachuk designs a monument to the Children-Heroes for the Glory Square in Kyiv.


On the eve of 1982, at the meeting of the Artistic Expert Board of the Ministry of Culture of the USSR and the Artistic Council of the USSR State Building on Monumental Sculpture, a decision was made to suspend the monumental and decorative works in Memory Park, which meant the destruction of the Wall. The “order” was received on December 6, 1981 in a letter signed by the Deputy Chairman of the Executive Committee of the City Executive Committee. During the three months of the following year — March, April and May — reliefs of Ada Rybachuk and Volodymyr Melnychenko were plastered with concrete.

In May 1982, the journal “Architecture of the USSR” came out with “justification” of this act of vandalism — article by Abraham MiletskyI “Synthesis — problem or task?”

Together with Ada Rybachuk began work on a series of large ceramic sculptures “Bronze Images”, work on which lasted until 2000.


In collaboration with Ada Rybachuk creates series of lithographs “Memory” and “Stop the Nuclear Threat”. In 1999, the artists donated them to the National Art Museum of Ukraine.


In collaboration with Ada Rybachuk creates the tombstones of Dr. Valentyn Kravtsov, his parents and a niece installed at the Baikove Cemetery. Together with other tombstones created during the 1980s — 1990s, they made a memorial cycle called “To the Memory of Friends”.


In collaboration with Ada Rybachuk works on the project “When the world is destroyed”, dedicated to the memory of the victims of Babi Yar, which included a book and three tapestries.

Currently lives and works in Kyiv. 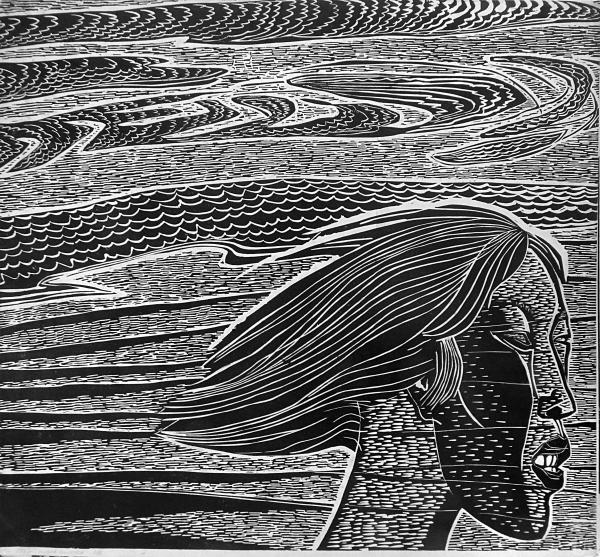 ARTWORKS OF THE NORTHERN CYCLE 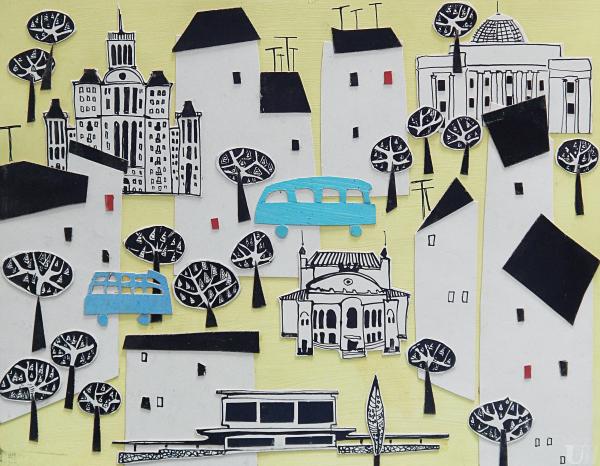 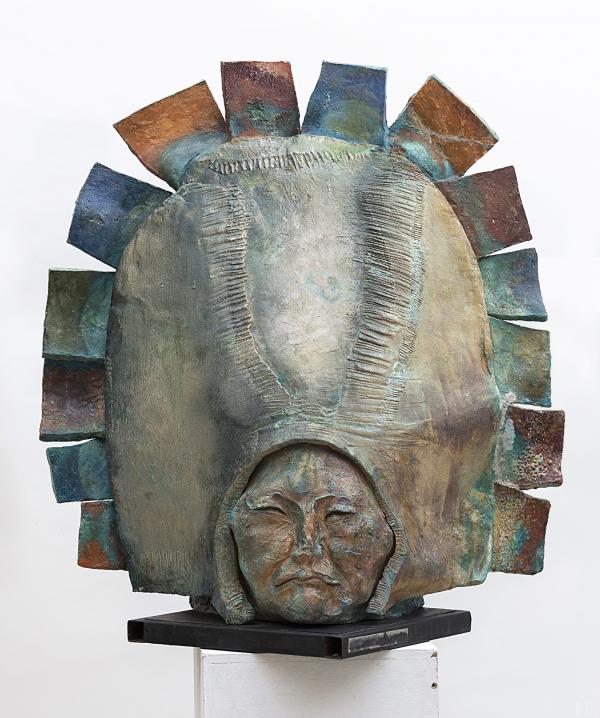 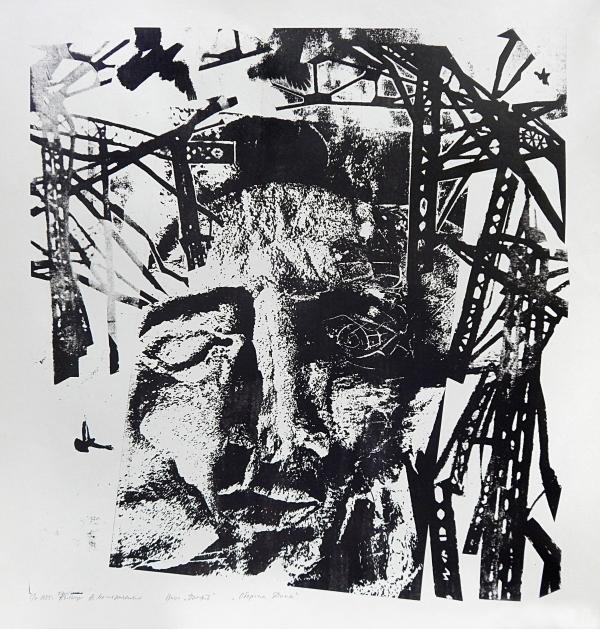 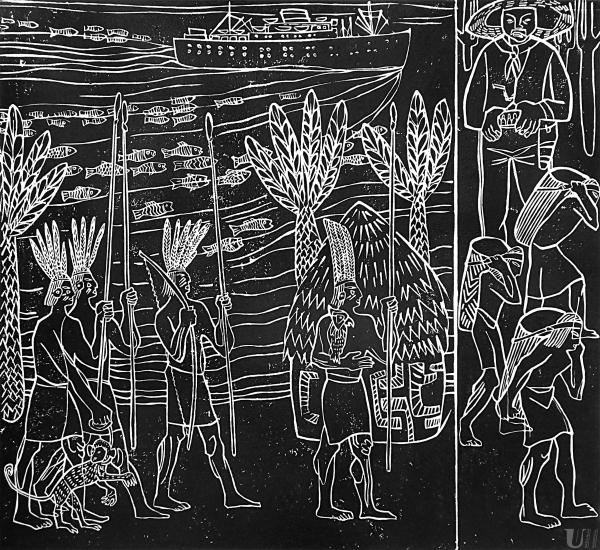 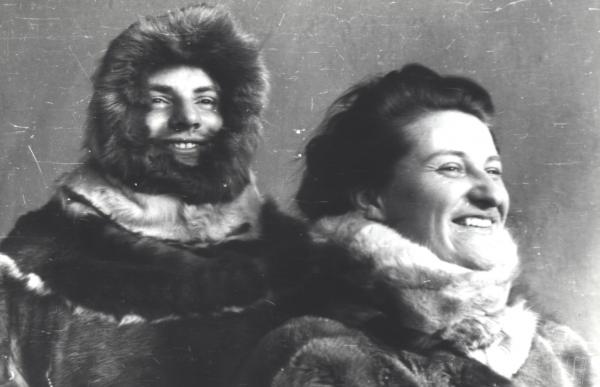 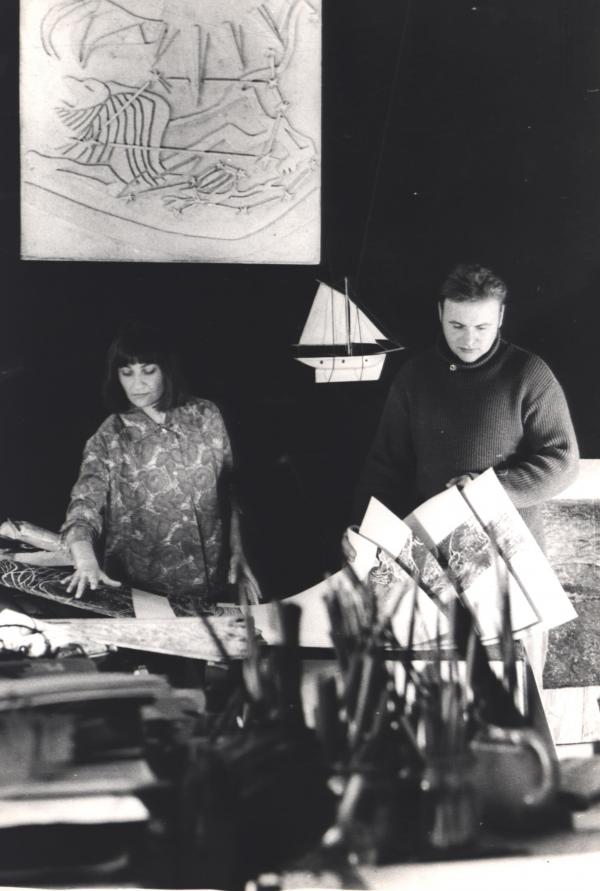 Ada Rybachuk and Volodymyr Melnychenko in the workshop on Filatova Street. First half of the 1960s 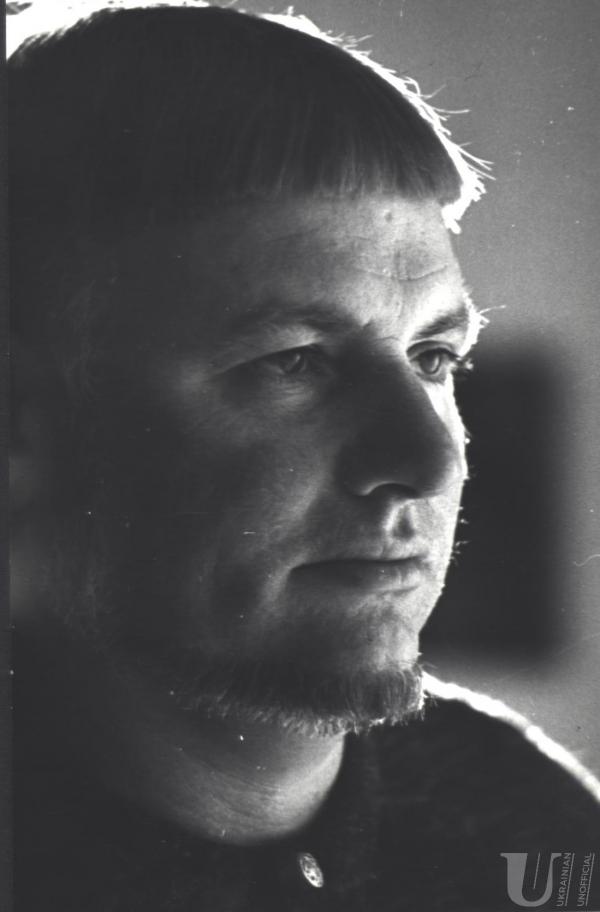 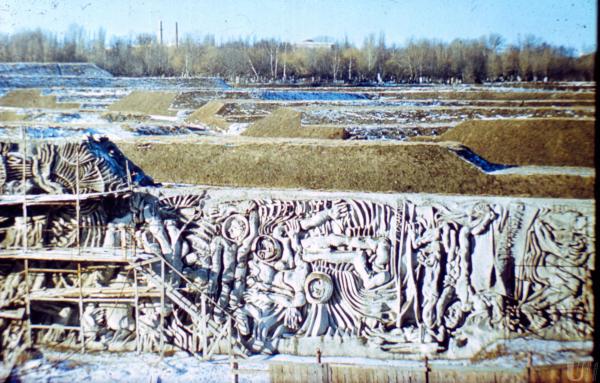